How to Play Amazon Music on Apple Watch

If you're an Amazon Prime subscriber, you can snag more than 2 million songs from Prime Music for free, or 75 million songs in lossless HD quality (millions of tracks in Ultra HD) if you upgrade to Amazon Music Unlimited($9.99 per month).

With the update to version 10.18.0 of the iOS app, users of the music offering from Amazon Music now have new options. After the update, the player app now comes with an app for the Apple Watch piggyback. Music can be streamed directly from the Apple Watch, or playback can be controlled on the iPhone. Currently Apple Watch supported music streaming services also include Apple Music, Pandora, Deezer, Spotify , TIDAL .

Part 1 How to Use Amazon Music App on Apple Watch

1. Install or update Amazon Music app on your iPhone to the latest version.

2. Tap the Amazon Music app on your Apple Watch, listen to music directly or use it to control the music playing on my other devices.

With Amazon Music App on Apple Watch, you can: 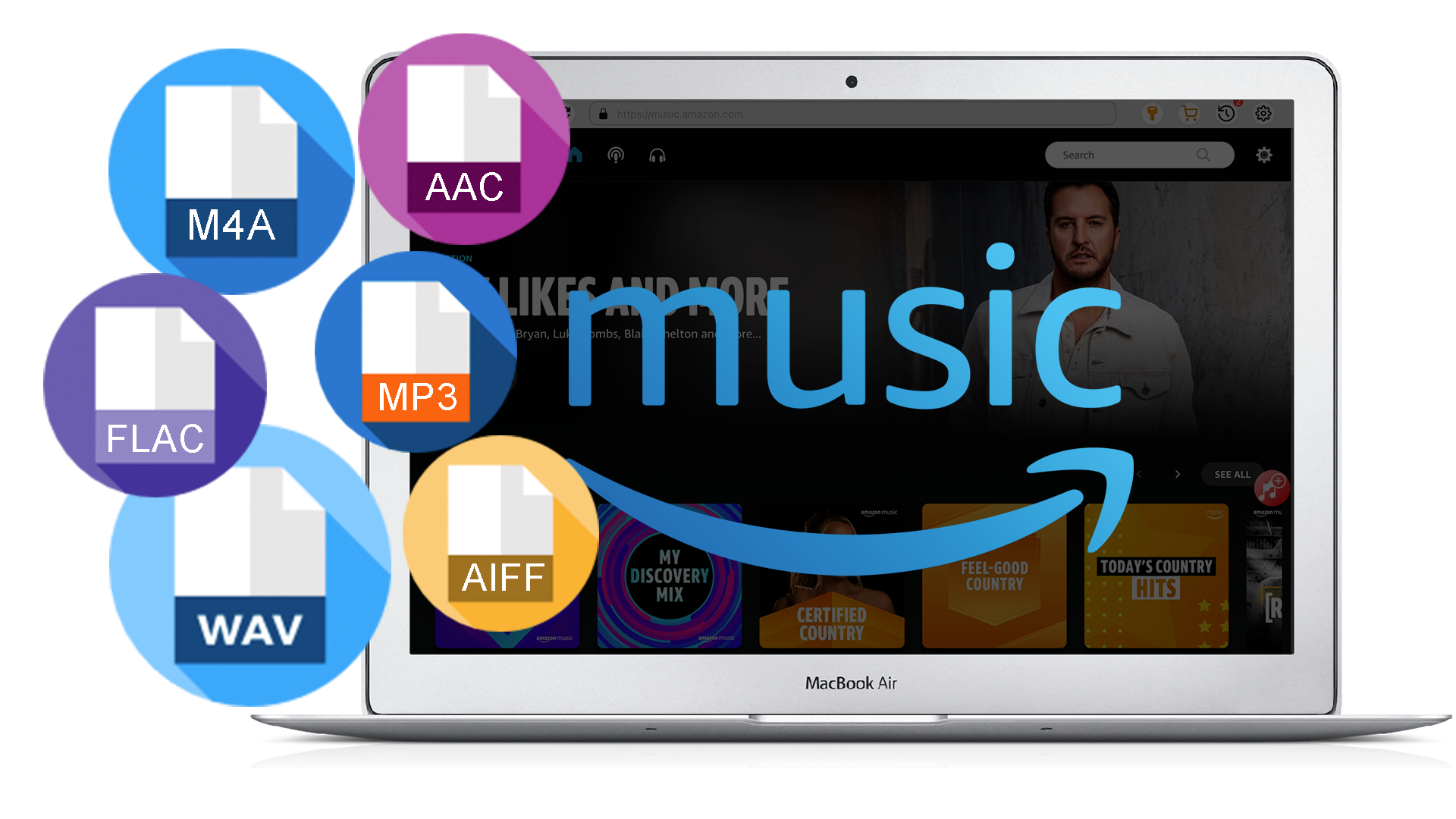 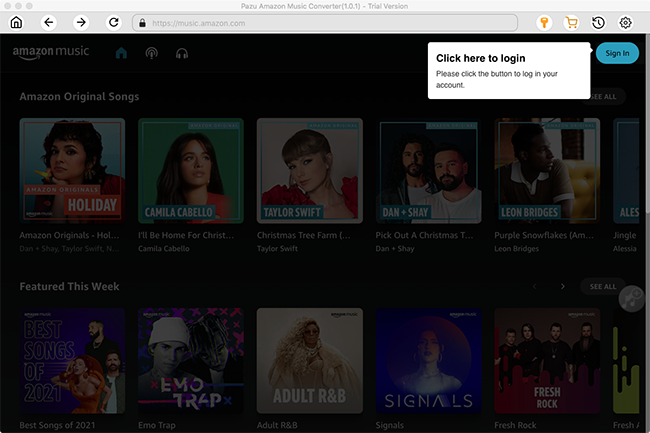 If you have purchased a license, click the key icon to register the converter. If not, continue using the trial version.

Click on the Gear icon on the top right corner to configure the output audio parameters. There are six audio formats, including M4A(AUTO), MP3, AAC, FLAC, WAV, and AIFF, for you to choose from. From there, you can change the bitrate for MP3 and AAC outputs. 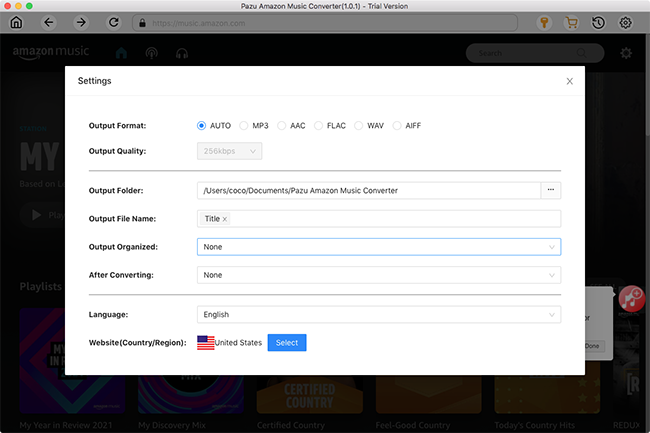 Navigate the Amazon Music catalog to select the desired songs, albums or playlists you wish to download. Once you open an album/playlist and tap the red Add button suspended on the right side, you’ll be presented with the list of songs. 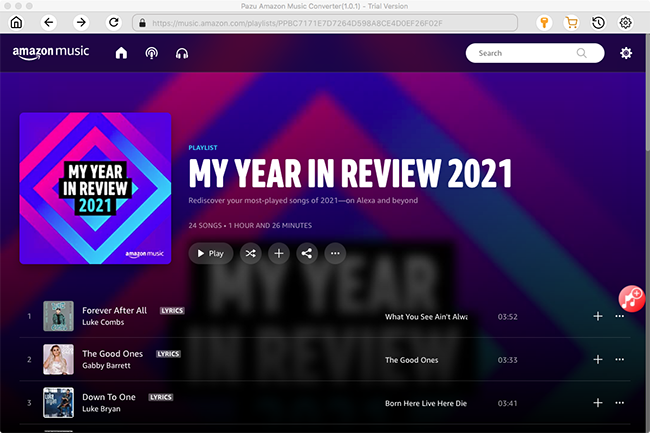 All songs in the playlist will be added by default. Click the check the box next to the track that you don't want to convert. 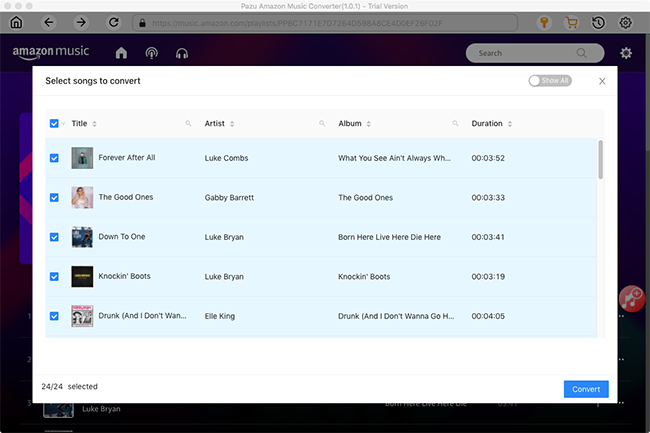 Click the Convert button on the bottom right corner, and Pazu Amazon Music Converter will automatically download and convert Amazon Music tracks to the default folder on your computer. 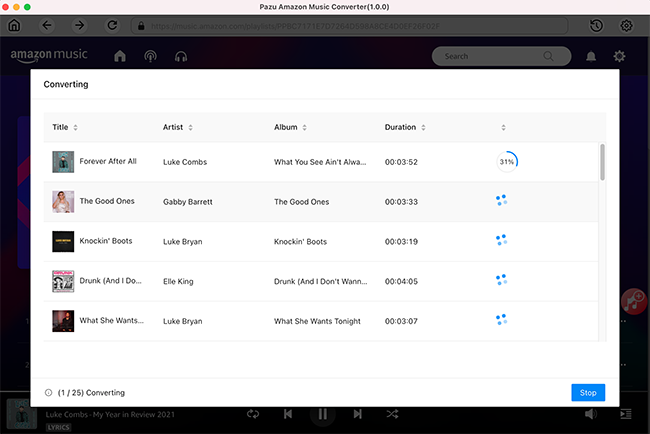 When the conversion process finishes, you can browse all the converted songs in the history list by clicking on the 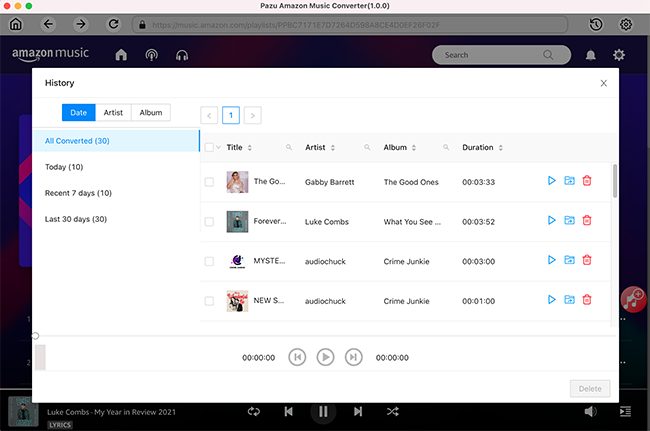 5. Move all the downloaded songs to iPhone

Transfer the downloaded Amazon Music songs to your iPhone

6. Sync the songs to Apple Watch

You can add specific playlists and albums to your Apple Watch using the Apple Watch app on your iPhone.

Music is added when Apple Watch is connected to power and placed near your iPhone.

You can also use your Apple Watch to control playback from everything, whether it’s wireless speakers, TVs, or gaming consoles, using Spotify Connect.

Control your iOS device and the Deezer app with your Apple Watch and listen to your favorite tracks, editorial playlists, and personal playlists. You can download all your playlist content to your Apple Watch. Downloaded content can be listened to without any network connection, and without your phone.

Stream music and control playback of TIDAL directly from your Apple Watch, independent of your iPhone. Or download all your favorite playlists and listen offline from anywhere without internet connectivity.TIDAL announced similar offline listening features for the Apple Watch May 25, 2021, following Deezer and Spotify.